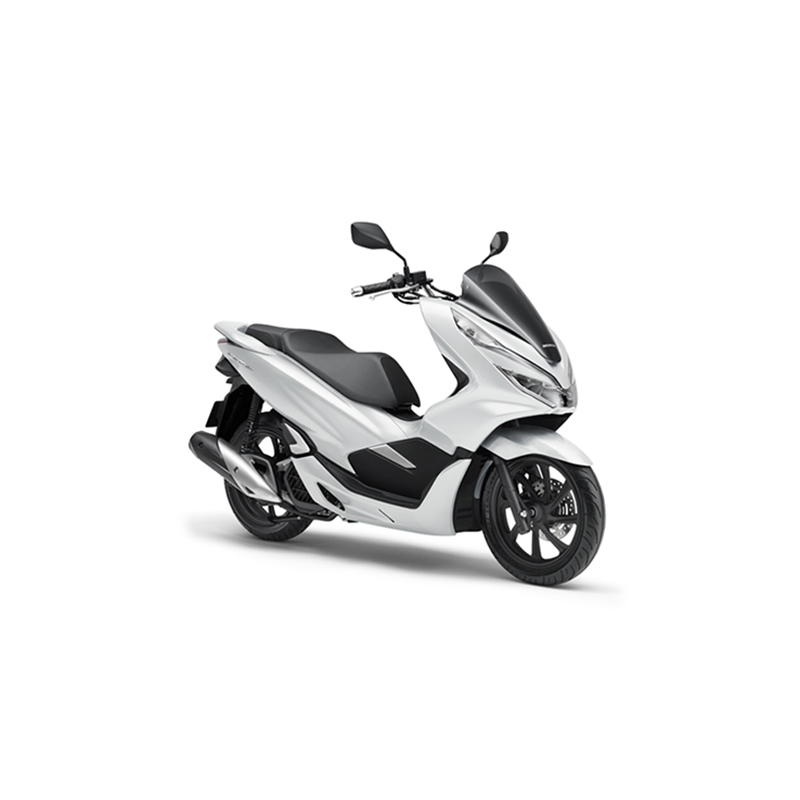 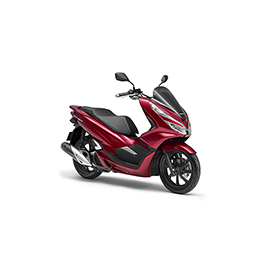 Eye-catching looks have always been key to the PCX150's appeal and for its 2019 upgraded natural contours and subtle chamfers give an even stronger substance to its trademark 'flowing' style. But there's function too; more freedom to move for the rider, increased under-seat carrying capacity and crisp LCD instrumentation to match the LED head and tail-lights.

While maintaining its outstanding fuel efficiency, the engine makes more peak power, thanks to redesigned airbox, inlet and exhaust, without sacrifices at the bottom of the rpm range. 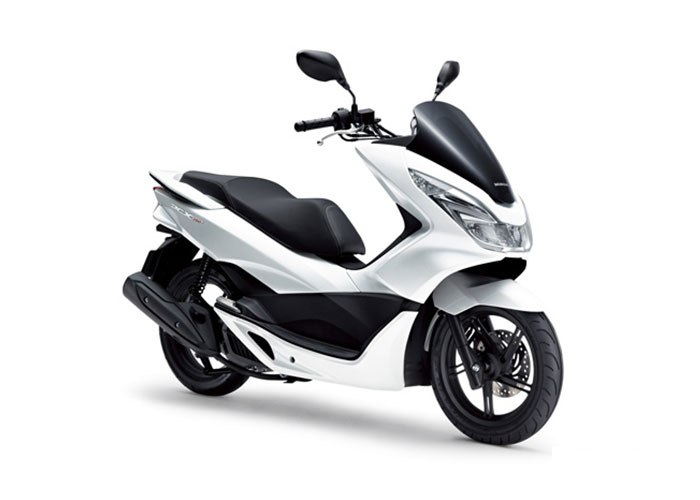 A design signature of the PCX150 has always been the bodywork - with its strong character line and 'block' primary paint colour - flowing together as a whole, front to rear. The new PCX150 expands on the theme, and employs new, natural contours of continuously varying curves, delivering a strong visual statement with an upmarket feel. Again, the smooth, large areas are painted in the primary colour and link front to rear without interruption, and the lower bodywork is also much more integrated into the overall styling.

Another detail redesign is the engine cover and airbox inlet, which are styled together as integrated parts. Finished in metallic silver, the engine cover emphasizes a solid mechanical strength; above it, a black cover - which incorporates the air inlet - is elegantly shaped with a mixture of firm lines and softer curves. From the front, the PCX150 also stakes out a strong identity; the LED headlights and razor-thin position lights slant independently upwards, with LED indicators discreetly filling out the upper, outer tips. This new 'face' also changes subtly between high and low beam. The slim LED rear tail light/indicator unit is still two-tiered, but larger in size for increased visibility.

The rider's view of the cockpit has been enhanced - the use of black against chrome around the handlebars adds a premium touch, as do chromed, tapered handlebar bar ends. The large left hand fairing pocket will easily hold a water bottle or drinks can and now has an extended lid (compared to the old design) to allow the rider to access the contents easily. It also contains a 12V AC adaptor.

The new bodywork allows the floor area to extend forward, giving more legroom. Both the seat and fuel lid are opened via one-touch switches (the seat itself has a sprung hinge, so it stays up when open) and the ignition has a key shutter for extra security. Internal capacity of the underseat storage has been increased 1L to 28L, with no increase in body width, and will easily hold a full-face helmet. The owner's manual and tool kit are now located on the underside of the seat. A new central console design presents all the information neatly and concisely in an easy-to-read format. An inverted LCD displays the speed, while other information available includes odometer, trip meter, fuel gauge, average fuel consumption and Idling Stop indicator.

The 2019 PCX150 has a new chassis; the tubular steel 'underbone' design of the previous model has been replaced with a full steel duplex cradle. This has improved the machine's handling ability and feel, without losing the in-town manoeuvrability the PCX has always been famous for, plus its user-friendliness and relaxed riding position. Also (for the first time on a Honda scooter) a plastic main fairing stay has replaced the steel structure used before; this, and the frame redesign has shaved 2.4kg from the structure, further aiding agility.

Wheelbase is 2mm shorter at 1,313mm and overall kerb weight is 131kg. Tyre sizes are larger, 100/80-14 front and 120/70-14 rear (as opposed to 90/90-14 and 100/90-14) and combined with the new wheels not only ensure lighter handling but also contribute to the improved fuel economy through reduced tyre deflection. The rear shock absorbers now sit more towards the rear of the machine and they use tri-rate (rather than dual) springs for a smoother ride, whether on rough city streets or out of town. Stopping power is provided by the two piston calliper 220mm front disk brake, and 130mm rear drum brake; single-channel ABS operates on the front brake.

The SOHC, liquid-cooled two-valve 150cc enhanced Smart Power (eSP) engine powering the PCX150 offers compact durability with excellent performance away from the lights plus quiet, smooth operation and reduced CO2 production. At this stage of its development, more power at high rpm - with no loss of torque down low - was the target for improved performance in higher speed ranges. To achieve the gain in power, the airbox now has a 1L larger volume than the previous design (achieved thanks to the rear shocks moving backward). The intake is positioned to the left and the location and profile of internal parts has been revised to allow the smoothest airflow path possible.

Up 2mm to 26mm diameter, the throttle body also takes in more air while the exhaust internals have been optimised to improve flow and feature a larger three-way catalyser. The compact radiator - integrated into the exterior of the right-side crankcase - uses a new shroud design with a larger volume at the two exhaust ports to improve transmission of hot air. This enhancement means a smaller fan - down 7mm to 125mm in diameter, with revised blade shaping - delivers highly efficient cooling without the need for a larger radiator to deal with the extra heat generated by the increased power.

Also redesigned are the left side crankcase and the drive/driven pulley wheels of the V-Matic continuously variable transmission, which are now larger and feature revised profiles expanding the range of gear ratios. This change maintains acceleration in the low-speed range (compared to the previous model) and delivers linear - and stronger - acceleration at mid- to high-speed. It also reduces belt friction, which contributes to the outstanding fuel efficiency.

Selectable Idling Stop automatically stops the engine running after three seconds at idle and re-starts it instantly as soon as the throttle grip is twisted. It's seamless in use thanks to ACG and the swing-back system that returns the crank to its position before air intake, and a decompression mechanism that negates cranking resistance from compression. The Idling Stop system has functionality to 'read' the battery charge and turn itself off to avoid excessive drain.

Greatly contributing to the engine's fuel economy and performance is its layout, which is built around a host of low-friction technologies. An offset cylinder reduces friction caused by contact between piston and bore, efficiently transmitting combustion energy to the crankshaft. A compact combustion chamber and optimised ignition timing combines with efficient cooling of the combustion chamber to aid resistance to 'knocking'. Bore and stroke is set at 57.3 x 57.9mm, with compression ratio of 10.6 : 1.

The PCX150 boasts Honda's innovative eSP (enhanced Smart Power) engine, which employs a host of low-friction technologies to improve efficiency while also offering enhanced durability and quiet operation. The PCX150s engine also has a 'spiny' cast-iron sleeve - with tiny surface extensions - which keeps in check any distortion of the inner bore diameter. This design lowers tension in the piston ring, reducing friction. A shell-type needle bearing is used for the rocker arm shaft while small and light rollers work in conjunction with cam profile and valve spring load.

To make daily life on board the PCX150 that little bit more convenient it's now fitted with the Honda Smart Key system. The Smart Key itself resides in the rider's pocket and does away with the need to constantly insert and withdraw a key for ignition, fuel cap and seat.

The PCX150 will be available in Australia in Pearl Jasmine White, Candy Lustre Red and Matte Techno Silver Metallic.

Perfect for learner riders, the PCX is LAMS approved.