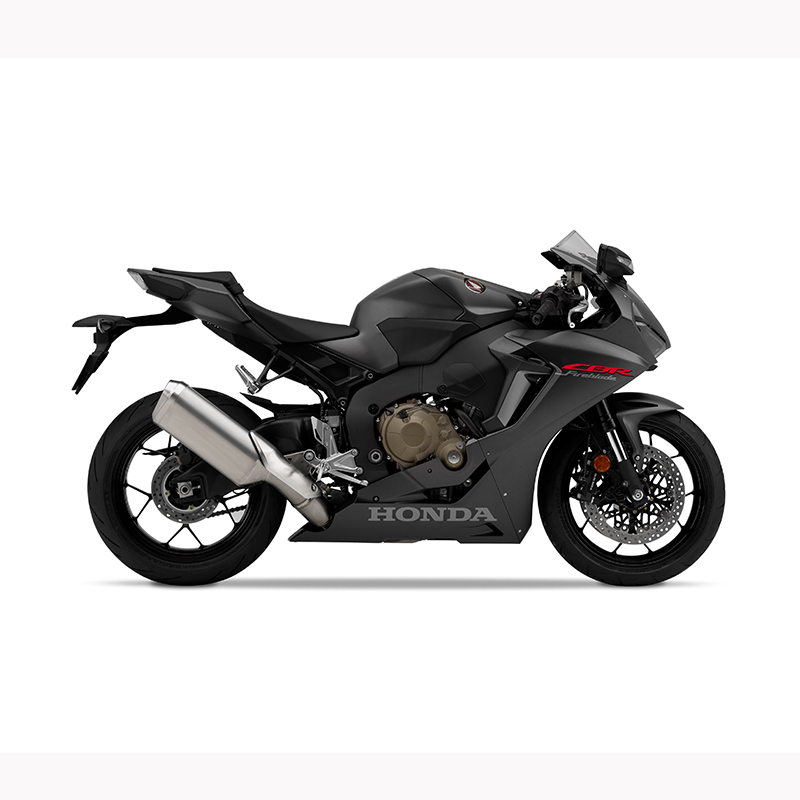 The Fireblade's evolution, since its introduction in 1992, has been guided by the design philosophy of Total Control, and it has always set the benchmark for how a litre-class super sports machine should deliver its prodigious power.

2017 saw a major advance for the CBR1000RR Fireblade and whole a new chapter in its story. It was made much lighter and employed a higher-revving, more powerful engine, while also benefiting from a Showa 43mm Big Piston inverted telescopic fork matched to the Balance Free Rear Cushion.

Great riders are always pushing their limits. Great superbikes are no different and that's exactly what our 2019 Honda CBR1000RR is designed to do. Offering more than just a big engine, this bike has great handling and superior power management. Equipped with a more advanced Honda Selectable Torque Control (HSTC) complete with our new, multi-level selectable wheelie control to connect with your machine and the track like never before. Looking for a monster in the streets and excitement for those winding country roads? Try the light, powerful and undeniably fast CBR1000RR and see how far you want to push your limits.

For 2019, the Fireblade receives obvious updates to its visual appearance and less conspicuous are some significant updates to the electronics package, led by rider feedback and intensive work from Honda's R&D engineers, as well as the HRC MotoGP team.

For circuit riding, where throttle openings are wider and lean angles deeper than public road riding, changes have been made to allow improved vehicle behaviour during HSTC operation. By including into its calculation logic a consideration for the rear tyre profile, the intervention of HSTC as the machine leans has become more uniform and precise. The result is smoother vehicle behaviour during HSTC operation on corner exit, and increased confidence for the rider.

Many riders at a circuit wish to run a high level of Wheelie Control with minimum amount of HSTC input in order to manage wheelspin and slides, without fear of the front wheel rising too far with resultant loss of speed. Whereas on 17YM, low HSTC setting brought with it low Wheelie Control, these functions are now separated to allow set-up combinations such as low HSTC setting with higher Wheelie Control. Furthermore, the new Wheelie Control system logic means that, however strongly the front wheel lifts, its landing is smoothly controlled, and the rider is able to fully concentrate on acceleration performance for the best possible lap time. Accordingly the TFT display now has a W for Wheelie Control (with 3 levels available) alongside the Power, Engine Braking and HSTC settings.

Reflecting input from the HRC MotoGP programme, the amount of torque delivered when further opening a semi-open throttle (such as at corner exit) has been increased, particularly in Power Mode 1. The result is a performance level tailored for circuit running on high-grip tyres with faster, lap time-reducing corner exit acceleration.

For high-speed circuit use, the level of ABS intervention has been reduced, and deceleration performance improved substantially.

The Fireblade receives a subtle update of its Matte Ballistic Black Metallic paint, with Silver instead of Red highlights; the Grand Prix Red version features more defined white stripes on the upper fairings.

Featuring high-compression 13:1 pistons, the CBR1000RR revs like only a flat-plane inline-four can. It also makes ten horsepower more than our previous generation of CBR10000RR.

Superbikes can deliver a great deal of back-torque through the driveline, upsetting handling but not the CBR1000RR models. Its Honda-designed assisted slipper clutch is the same type used on our MotoGP bikes. The design does away with the need for heavy clutch springs, ensuring full power transmission with smooth shifting and a light clutch pull at the lever.

The CBR1000RR's throttle-by-wire system works in concert with our Honda Selectable Torque Control. With the two, you get your choice of three engine power-delivery modes, plus two which you can custom program yourself.

Almost a full pound lighter than our previous generation, the CBR1000RR sub-frame further refines our mass centralization efforts. Light is always right, and these models are the lightest CBR1000RRs we've ever produced.

These CBR1000RRs are much slimmer than previous models in the tank/seat junction area, and also in the upper cowl (more than 24mm trimmer). This improves aerodynamics, and the narrow tank makes it easier to tuck in.

TFT means an instrument display that's lighter and easier to read than previous LCD designs. It is a first for Honda, and it has made its premiere on the CBR1000RRs.

Headlights, tail lights, turn signals with the CBR1000RRs it is all done with lightweight, efficient, cool LEDs.